You’ve done it! You managed to create an absolutely flawless mix. There’s only one problem. It all sounds way too clean, and that’s not really what you wanted, is it? Thankfully, all is not lost. You can still bring the rawness back into your mix. What you need is Distortion, and we’re here to help you understand what it is, what it does and how you can use it. Read all about it in Distortion Explained.

What Is Distortion And How Does It Work?

Many old-school producers still grit their teeth when the topic of Distortion comes up. This is because Distortion was a big problem back in the days. Volume levels would go beyond what a certain piece of hardware could handle and you’d end up with copious amounts of unwanted noise that would kill your mix.

The Distortion of today is not that different, except for the fact that it has gone from undesirable effect to creative tool. Most Distortion tools – we should really say Distortion simulators – imitate certain forms of analog Distortion while giving it a spin of their own. Guitar amps are excellent examples of this, often used to give electric guitars their raw and rocky edge.

But Distortion is also a great weapon for dance music producers, not just for the people who like harsh guitar riffs. In its plug-in form, Distortion tools add large amounts of gain to your audio signal, causing the peaks of the signal/sound to compress or clip. This leads to various effects, such as added harmonics and a smaller dynamic range. But most importantly, the right amount of Distortion can make your audio signal sound warmer and more nasty. And that’s exactly what you wanted, right? 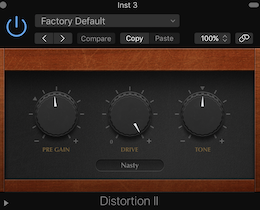 What Kinds Of Distortion Are There?

But – as always – it’s not THAT black and white. There are many different forms of Distortion. And while all are more or less similar in what they do, they don’t necessarily sound the same in the end. Therefore, we’re listing six forms of Distortion, just so you can decide for yourself which kind of Distortion serves your purpose best.

Tape Saturation sits among the more delicate forms of Distortion, simply because it does more than just distort. It smoothens transients, adds a bit of compression and finishes it off with some gentle distortion. If you’ve ever wanted to add warmth, nostalgia and an analog feel to a sound, Tape Saturation is your go-to tool.

Valve Saturation is a lot like Tape Saturation. It also adds warmth and cohesion to the audio signal, but just works a bit differently compared to Tape Saturation. Both are good options, so which you pick is entirely up to you. It all depends on what suits your mix and personal flavor best. Of course, the sound changes per plugin as well, so you may want to try out several to find the right one for you.

If anything deserves a warning message, it’s this one. Clipping is what you get when your audio is louder than what a sound system can handle. Speaking in metaphors, Clipping is like your high-school bully. It’s lurking around every corner and best to avoid at any cost. We are not joking. Clipping sounds horrendous. You get clicks and scratches and all sorts of unwanted sound bites. So why would you even want to use it? Good question.

In some cases, you may want to (purposefully) add a very small amount of clipping. It sounds harsh and grungy and edgy, which could be what you need to spice things up. It can add a cool crunch to your drums or boost the higher frequencies of your kick or bass without altering the lower frequencies. In any case, you’ll be messing up your sound quite a lot. But as long as it’s not too easy to notice, it could be what you mix needs.

SIDE NOTE: We’re talking about the use of a clipper as an effect on a certain (group of) sound(s). If you want to place a clipper on your master channel for the purpose of competing in the loudness war, we highly advise you to just use a limiter instead.

Overdrive is one of the most common forms of distortion and takes the middle ground between the most delicate and harshest forms of distortion. Call it “controlled clipping”, if you will. It comes from the time when (guitar) amps were purposefully overloaded to get the desired effect. With Overdrive, you preserve some of the audio signal’s dynamic range and can still get relatively clean sounds. It merely adds aggression by giving the overtones an extra push. 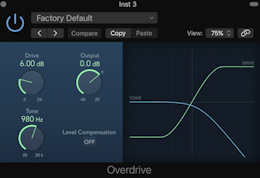 Whereas Overdrive is more subtle, Distortion is not. It royally screws up your audio signal and gives you the filthy sound that most associate with heavy guitar music, such as Metal. Want something to sound super aggressive and – let’s be honest – like you’re about to murder someone with a chainsaw. Look no further.

Simply put, using Bit-Crushing and Sample Rate Reduction can be seen as purposefully downgrading the quality of your sound. To better understand this, let’s dig into the more advanced material.

In music production, a digital signal – which gets converted to actual audio in the end – stores the information of an audio signal and tries to relay this information as accurately as possible. This “accuracy” of the digital signal is displayed in either bits (e.g. 16-bit resolution) or sample rate (e.g. 44.1kHz).

What Bit-Crushing and Sample Rate Reduction do is that they discard some of the original signal’s information, thus making the signal less accurate. Think of the difference between a high-resolution photo and a low-resolution photo, but applied to audio. What you get is a sound that feels both edgy and retro, somewhat simulating the sound from time periods when the audio quality wasn’t as good as it is today.

When Do You Use Distortion?

With all that being said, when do you use Distortion? The simple answer to that question is: whenever you want. As long as you know what you’re doing and know better than to overdo it, you can use Distortion as often as you’d like on whichever sound you think may need it.

In general, however, you’ll want to use Distortion either when you want something to sound more aggressive, warm and raw or when you want a sound to cut through your mix a bit better. As with all things, subtle use may help you more than going full throttle. Don’t let that kill your vibe though. Experiment all you want. That’s what made Distortion turn from nuisance into creative tool in the first place.